All You Need to Know About SNSD Leader Controversy

All people are born in a different culture and background, and we don’t have the ability to choose whether we want to be raised in such a culture or family. The differences we have can’t obstruct us to get the same treatment as humans beings. Racism issues have been present as one of the oldest issues throughout our history and it would seem that they can never be completely removed. It happened also with SNSD’s Taeyeon, the main vocal and also the leader, who has been called a racist because of her comment about artist Alicia Keys and some of her reactions to black people.

Do you want to find out how Kim Taeyeon’s comment become an issue of controversy between her fans and non-fans? Check this out!

It actually happened several years ago, when Taeyeon got invited to be interviewed in a radio broadcast, the Chinchin radio broadcast. SNSD “leader” Kim Taeyeon started a discussion with co-host DJ, Kangin about her recent hospital visit in 2009.

Apparently, a nurse “refused” to give her an IV shot which in turn had her ranting about it during the live broadcast with such phrases as “But, if that person is a nurse and if it’s really bad, then she could just give a shot while I’m laying down,” and “I’m not letting sick people go to that hospital.” She also kindly apologized by saying, “Fine fine. I get it with all the messages. It’s my fault for being sick, I’m SORRY.” After, of course, the message boards were bombarded with complaints by doctors and nurses.

And to make matters worse, after an Alicia Keys song was played, Taeyeon actually said this about the acclaimed RnB singer:

After the broadcast was out, many people regarded it as a racist comment. The topic became viral and was debated on many internet forums. But there are pro and cons about this comment. SONE, SNSD’s fans, didn’t take this as racism, but only a misunderstood meaning of the English translation of the Korean language and terms, which Taeyeon used. 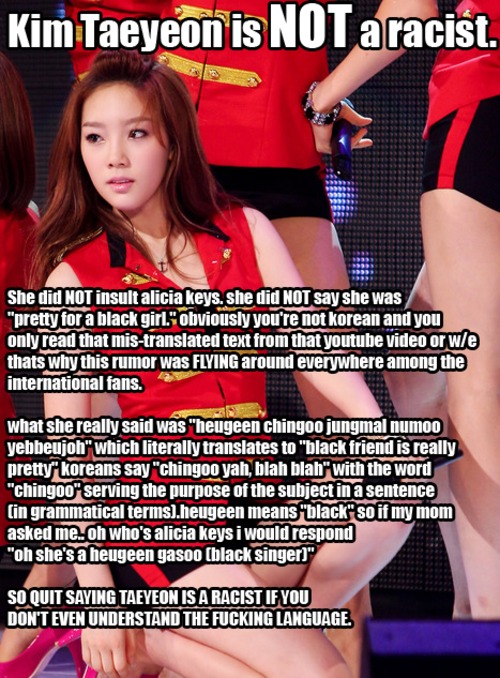 Here are some comments from Korean netizens (source: TV report on Naver):

7. [+36, -3] The person who called her pretty for a black person??? Well, Taeyeon has so much gross plastic surgery now that Alicia Keys looks better than her with a bare face ㅋㅋㅋㅋ

8. [+22, -1] She looked so innocently pretty when she congratulated her during Beyonce’s award… I thought she at least had light make up on

Moreover, she also said that she wants her kids to be pale or in other words, to look as white as they can be. Which, many people regarded as a racism issue with black people and connected it with her ‘insulting’ comment of Alicia Keys. Meanwhile, Alicia Keys is a mixed race person, while Taeyeon is a pure Korean.

Concluding to the issue, do you think Taeyeon is a racist? Or is it just an effect of her education and culture background?

However, it’s very common for dark-skinned Asians to be made fun of among their own kind. In Asian culture, even if you are actually average looking, if you have fair skin, you are considered attractive in general (but keep in mind that beauty at the end of the day is subjective).

The reason this is baffling for western people is that their population is largely multi-racial and they are still working on living with each other in harmony.

So an Asian that has a fair skin fetish need not necessarily be racist since the fetish can be fulfilled within their own race. The fact of the matter is, despite the whole “all Asians look the same” thing, Asians actually look pretty varied. But nowadays, there are a lot of cultural mixes of Asians and Westerners, or even Africans, so the bottom line is we should never judge or degrade someone from another race but respect each other despite our differences in race, religion, or culture.

Get Closer With Member of ARIAZ, Yunji (Profile, Facts, Debut, Personality, Produce 101, and...

All You Need to Know About HALO’s Ooon (Profile, Facts, Birthday, Religion, and Personality)

Get Inspired By Diet Plan and Short Hair Style of Apink’s...

Find All Facts About Cheating Scandal of Nam Tae-hyun From Jang...