In the world of Korean boy band fandoms, abs are probably considered as one of the fans’ focal points of attention. Fans search high and low for the smallest glimpse at their favorite idol’s abs. This is no different for those who are fans of BTS. In BTS, usually, people point to either Jungkook or Jimin as the members who have the best abs, mostly revealed through calculative dance choreographies or accidentally while messing around on stage. But does it ever occur to fans that not only Jungkook and Jimin possess abs in BTS?

Such seems to be the case with V. V is not one of the members who usually show off his abs on stage or even in photo shoots. The closest fans have gotten to a shirtless V is the performance he did at the 2016 MAMA, where he revealed his toned shoulders and back, but not his abs. This does not mean that he has never shown his abs in public, which, of course, some eagle-eyed fans have captured these precious moments. Let’s take a look at the times V has shown his abs in public!

As most of you know, BTS has had some particularly revealing choreographies from the time they debuted until now. But not all of the moments included below are found while V is choreographed to do so, some are done deliberately by other members lifting up his shirt or accidentally while lifting his arms up in the choreography. Let’s take a look at some of those moments below!

When it comes to working out and dieting, V does not seem to have a particular routine or meal plan that strictly adheres to. He is known for his carefree and flexible personality, thus it seems like him to completely abandon these kinds of things, to begin with. If he does have a specific routine, he does not seem too keen on sharing, as in one of the broadcasts he did on V Live, he rather encourages fans to eat happily and healthily. 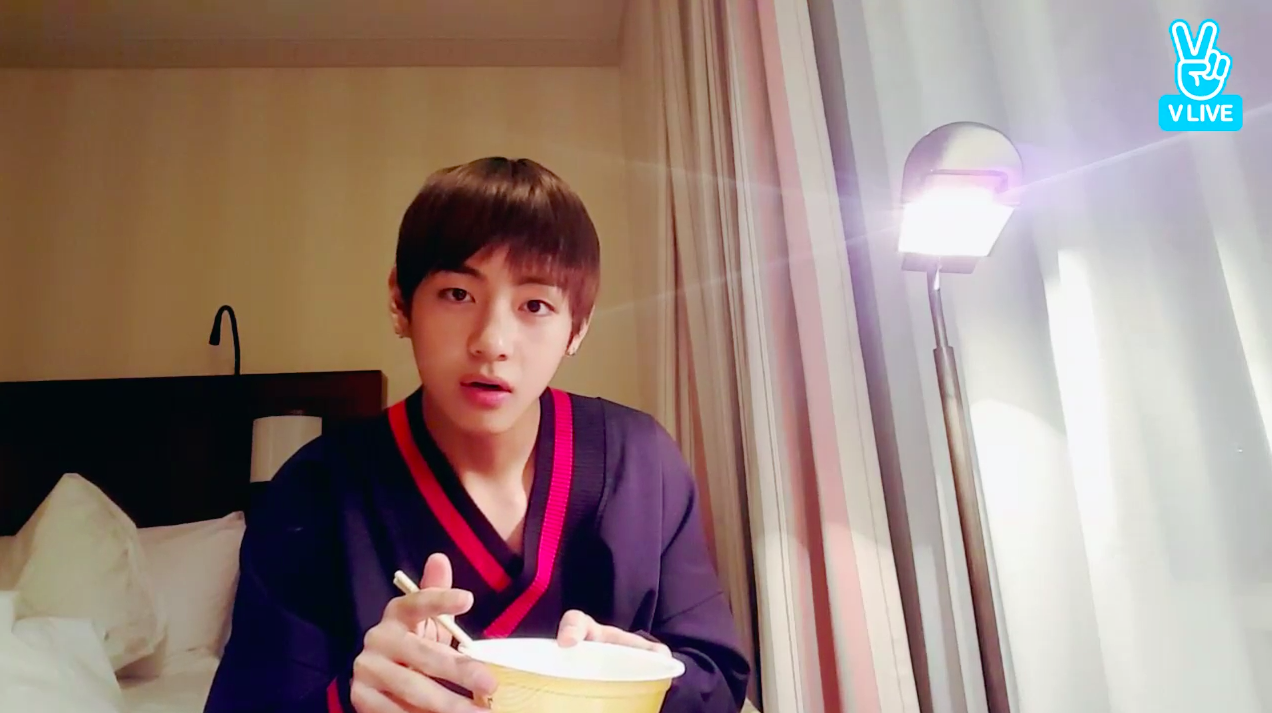 “If you don’t try to enjoy the taste of your food, you’ll put on weight. That’s why Suga’s on a diet right now.” After a bit of thought, he came up with a third item. “Thirdly, you won’t gain weight if you eat soup,” he said, as soup is mostly known to contain 90% liquids. He added, “It’s a bit similar to the first one. Some people don’t like soup because they think all of the seasonings are in the soup. But the best thing is to just eat it without thinking about it or getting stressed.”

“So everyone, when you’re eating, don’t think about anything at all. Just enjoy it, and you’ll gain less weight,” he advised. V added, “Also, try to turn into an exercise one of your hobbies. Playing video games can be exercise too. If I imagine that my character running is myself running… that’ll make me lose a bit of weight too. That’s one way to diet!”

It seems that V is just blessed with a naturally fast metabolism, as he does not seem to be interested in either dieting or actual exercise. His metabolism allows him to consume quite a lot and not gain that much weight, as it produces just enough energy to power him through his very hectic work and not much left to be turned into excess fat. So what do you think of V’s abs? Comment your thoughts and opinions in the comment section below!

Rumor About Ha Ji Won’s Boyfriend and Ex-Boyfriend That You Should...

All You Need to Know About Red Velvet’s Yeri’s Transformation (Pre-Debut...